The big debate gets hotter every year: Will Kmart be able to say "Christmas?" Will the Red Kettles show up in front of Trader Joes? Will the Menorah be larger than the Manger in front of City Hall? Will the neighborhood association police complain about my front-yard, light-up, blow-up, life-like, genuine, animated, musical nativity scene?

Here are some choices for your own nativity idol:

This one has stuffed Joseph and Mary, stuffed angel, even a stuffed star. 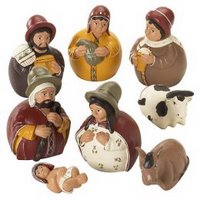 I like this portly group -
Weight Watchers does Christmas.
Next year, a little less ham,
and let up on the egg nog, people.

Well, here we go. See what a little self control can do? Skinny, super-model Xmas. Not too much mutton on that scrawny lamb. And I wouldn't advise Mary to ride the donkey home - maybe she should carry it. 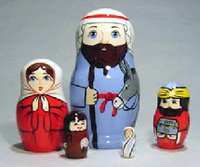 Here's a wonderful snow globe nativity. Shake it up and it will snow, just like it did in Bethlehem.

Also, it plays music. You can tell by the little music notes. 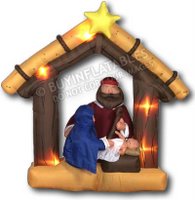 Here's the big one. Inflates. Lights up. Guaranteed to show the world you're a Christian. You can put it right next to blow-up Grinch, blow-up Homer Simpson, and blow-up Big Bird, all celebrating this holy time of year.


Don't get angry. I have a nice creche in my home for which I paid good money. And we set it out every year. And it does mean something. But it doesn't "Keep Christ In Christmas."
I wonder if we shouldn't just pack it in. Give up. Let the merchandisers have Christmas, and we can take our own celebration back. Let's do a little research, come up with a birth date for Jesus sometime in the summer, say August 4, and move the whole spiritual party to that end of the calendar.
Joseph had a dream, wherein he was instructed to transport Jesus from Bethlehem to Egypt to protect the babe from the politically correct slaughter that was going to take place. The goal of King Herod's decree? Obliterate Jesus.
So, in keeping with the spirit of the season, I've had a dream. I was told to move Jesus from December 25 to August 4, in order to protect him; protect him from Christmas. And before you nod your head and point a finger at some ACLU lawsuit and claim moral superiority, ask yourself these questions: 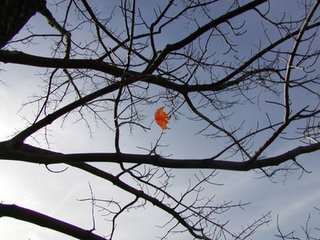 It was a maple. It had hung on, stayed around, watching all the action, taking it all in, refusing to follow the crowd. I had seen it and admired the tenacity of the Last One to Fall.

So I wanted to ask it why.

“Because it was not my time.”

“Because it was cold, and I was lonely.”

I looked him over, saw the rough edges. “You look tired.”

“Yes. I ran out of endurance. I couldn’t hold on any longer.”

The wind kicked up and he danced a bit in it. I was surprised at the loft he had left. “So it’s not over yet.”

Any color was gone. He was not bronze or gold or brown, but ashen. The sugar had gone out of his veins.

He looked up at where he’d been – far away in the heights. There was nostalgia in his brittle nature.

And a strong breeze caught him, tossed him up and then down and he lost another part of himself. He flew up again, higher now, reaching and straining to resume his place in the world. The air threw him against the tree and pieces of him scattered in an autumn march, circling and climbing, carried into the sky by the enemy that brought him down after all.
Posted by Ron Benson at 8:52 AM 1 comment: 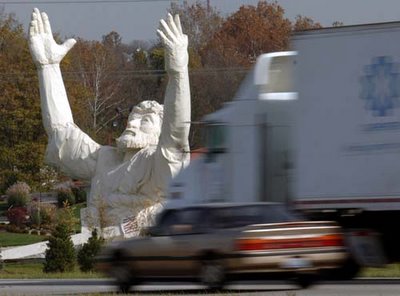 I can't believe it. BIG JESUS made the news here in Detroit.

After several trips to Nashville via I75 through Ohio, we learned to look for this laugh-out-loud landmark. Anybody heading down after us was cued up to watch for it; not that anyone would actually miss it. If you're not sleeping, you'll see it.

According to the Free Press article, people are now claiming that BIG JESUS has protected drivers on the very dangerous stretch of the interstate. "Thank you, BIG JESUS!"

Can I get a little BIG JESUS for my kitchen? Fewer bagel knife mishaps would be nice. And I should have one for my car - the Protestant version of St. Chris.

People who buy into this and then wag the finger at Catholics for things like Rosaries and Icons and Candles for the Dead should be forced to put a BIG JESUS on the top of their homes so we will know which houses to avoid.

Of course, it might make the neighborhood safer.
Posted by Ron Benson at 10:46 AM No comments:

Got To See This

My son, Garrison, has posted two new movies on his website. These are must-see. Find them here: http://www.bensonbasement.com/studios/index.htm
Posted by Ron Benson at 2:56 PM 1 comment:

There Otta Be a Law

I came close to losing it all in a car accident yesterday.

A Town and Country van was in the lane left of me and slightly ahead. The driver jerked right it into my lane, almost crunching my front left. He reacted and pulled back left into traffic on that side. Then back into my lane again, then into his own, then slowed to nearly a stop.

I looked back and he was behind me. I could see clearly in my rearview mirror: he and his passenger were embroiled in an argument. There was no doubt they were very angry, and if I'd had the skill, I could have told you what the whole thing was about.

They were signing. With their hands. Screaming with their fingers, yelling with wild, urgent gestures, so fast and furious their movement was a blur. At least one of the them was deaf, so the flailing was angry communication. The result? Eyes not on the road, hands not on the wheel, my life on the line.

I had a sign I thought I might give to them, had they been paying any attention. They didn't even hear my horn.

I like this poem by Galway Kinnell in Three Books:

Crying only a little bit
is no use. You must cry
until your pillow is soaked!
Then you can get up and laugh.
Then you can jump in the shower
and splash-splash-splash!
Then you can throw open your window
and, "Ha ha! Ha ha!"
And if people say, "Hey
what's going on up there?"
"Ha ha!" sing back, "Happiness
was hiding in the last tear!
I wept it! Ha ha!"