A dusty beer bottle sitting on the bar wobbles around for a moment, grabbing my attention, but before I can swing that direction, the wobble stops.

A bunny appears just outside the window to the right of the bar. It sticks its head up, and the ears wave. My arms lift to center on it, but then the bunny disappears behind some bushes.

Back inside the establishment sits a man at the piano with a tall, funny hat. He's playing "The Yellow Rose of Texas" on the tiny instrument. It is loud, honky-tonky, punctuated by the popping sounds of the people shooting on either side of me. I lift my rifle and take quick aim at the hat. I know what's going to happen. It jerks on his head. I shoot, and a bright red flash lights up in the middle of his ten-gallon head piece. Direct hit.

I shoot at a couple more moving objects from various sources: a viper coiling around a tree branch, a goofy-looking deer poking its head from behind a plastic tree, a vase of flowers on a table. I don't get any more points, and the game is over. Again.

*******************
I grew up with strict regulations on money, and plunking quarters into machines that ate them like candy was not considered good stewardship. Arcades were not allowed.
"That's just a waste of my cash."
"You should save your money for something important."
"Do you think this stuff grows on trees?"
I was arcade-deprived. They have therapy for this.
Any arcade I have ever played, I played as an adult, except for the times I rebelled and, looking over my shoulder, shoved a quick coin into a slot, played a game completely distracted with fear and guilt, and felt great remorse for my wastefulness when "Game Over" pointed a finger at me, identifying me to all around as a loser.
But I still love arcade games. One of my favorite birthdays, my wife planned a family outing which featured me and my kids "wasting" a load of lucre on an afternoon of fun at Dave and Busters. The Rifle Range is one of my guilty pleasures at a good arcade.
********************
Arm me with an electronic gun, point me in the direction of a faux-western, cardboard cut-out saloon in the woods, and it'll feel pretty much like life. Mine; maybe not yours.
This is multitasking: shooting at all kinds of targets in one try, on one quarter. When the time runs out, the gun drops, it's time for another coin to power up the works. I feel guilty, because I know all this is costing somebody. But I keep shooting, missing way more than I attempt with an aim.
When my pocket is empty I go to my DAD. A twitch in my open palm says, "I'm sorry I wasted all those quarters and didn't hit much." I look at him with guilt, expecting that DAD will say, "This is just a waste of my quarters! You should spend coins on something important! Do you think this stuff grows on trees?"
But He doesn't. He holds my outstretched hand in His, and he reaches into His pocket, and He unloads so many quarters that they fall around on the floor, and He laughs, and He says, "Go try again. There's more where that came from. This is what My quarters are for."
So I plunk another quarter in, and my gun starts to hum, and I'm feeling confident and cocky, and I fire one off at the beer mug on the round table to the left of the piano, and the red light flashes, and I feel like I can keep on firing away forever.
Posted by Ron Benson at 10:30 AM 1 comment:

How's this for amazing? You can hear me speak. Right now. On your computer. Follow the link to Crossroads Community Church and glance down the page to find my talk: The Fig Leaf Dilemma. And please let me know what you think. Here's the link: Crossroads
Posted by Ron Benson at 10:30 AM 1 comment: 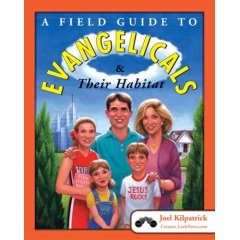 Another book you need to buy. Be the first on your block to own A Field Guide to Evangelicals and Their Habitat by Joel Kilpatrick. You can pre-order now. You can pre-order by clicking on the picture. Support your fellow satirist.
Posted by Ron Benson at 9:41 AM 1 comment: