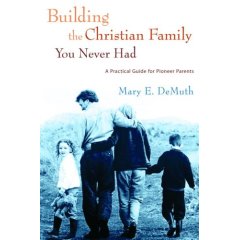 Mary has written a great non-fiction book for parents who were not raised as Christians. Reality being what it is, however, all of us need adjustments in our parenting protocol, whether we are GUBA's (Grown Up Born Again) or not. I benefitted from Mary's insights. I'm a PK.

(We need our own book, by the way. Maybe - PK Recovery: Learning to Love the Church after Growing to Hate It).

Mary's book is called Building the Christian Family You Never Had. You can learn about Mary and more about the book at Mary's website: Relevant Prose. Or click on the picture to order it.
Posted by Ron Benson at 2:47 PM 5 comments: Links to this post

Who Speaks for God?

Editorialist Leonard Pitts Jr. makes me think, which is often painful and never finished. Here is a piece that appeared in the Detroit Free Press. Pitts throws his light on another fine mess created by someone who poses as God's official representative. Here's the link: Pitts

What is scary to me is that I presume to speak for God every Sunday. How can I possibly be arrogant enough to do that? What makes my words any more "godly" than Pitts or Phelps, Robertson, or Nagin? Jim Wallis and Charles Colson both wrote books with the title, "Who Speaks for God?" Do they arrive at similar conclusions?

When The Marbles Fall Into Place 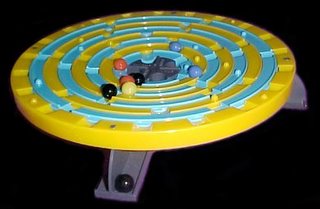 Several decades ago I was young and played games. One that I enjoyed was called Stadium Checkers. The object was to move your colored marbles from the outside ring into the center by adjusting the concentric rings and letting gravity do its work. The marbles would roll around the ring and then, at just the right place, would click down to the next inner ring.

I have thought of this game many times since I was a kid. It always jumps to mind when I think about the plans and purposes of God: his will, my life, grace, and serendipity.

My wife and I have prayed that God would always go ahead of us. We don't like to push our way into his will. We try to keep ourselves from telling God what to do. We want to be followers of Jesus, which means he's out in front calling the shots. We try, sometimes failing, to take the trail he gives us. We pray that he will pick the trail before we get there, that we will not ask his blessing on trails we've already taken. The issue is trust.

Sometimes it's been frustrating. Sometimes exhilarating. Sometimes we haven't done so well, sneaking up and running ahead. It shows the weakness of our faith to say we have been surprised when God shows up in front of us on the trail and we look back and discover that he had been leading us all along, even when we thought we were on our own. The last three years have been like that.

We keep moving to the pull of gravity, marbles in concentric wheels, waiting for a divine turn to bring the planets of our circumstances into alignment.

****************
Last weekend I was asked to speak at a retreat for pastors and their spouses. I was nervous. My heart has been burning for this opportunity - a pilot light inside me waiting to ignite for men and women with a mantle like mine. I knew what God had given me to say, born out of my circumstance, and I was frightened about delivering the message. I expected some resistance, because years ago I would have been the Chief of Resistors.

Instead, the marbles clicked. What God had provided in my heart sparked discussion, introspection, perhaps healing. As at other times when this has happened, he told my heart that it was his business to move the rings; I just needed to wait on him and let divine gravity take its course.

I'm writing this listening to Ashley Cleveland belt out "Precious Lord, Take My Hand." I am writing this in the unsteady place - I feel the rings are moving, the marble is about to drop, gravity will have its way. Scary, but thrilling.

You move the rings. I will rest here. When and if it is time, help me not to resist the pull of your purpose. I entrust my marble-self to your skillful hand, your strategic mind, your grace-filled turning of the years.
Posted by Ron Benson at 10:45 AM 1 comment: Links to this post

What Is God Thinking?

Here's an interesting piece from the LA Times that appeared in the Detroit News on Sunday re: Katrina, 9/11, etc: Does God Get Mad?
Posted by Ron Benson at 8:47 PM 1 comment: Links to this post

Spanking the World = Whipping the Dead

I gave a sermon yesterday on "church discipline." (I'm an interim pastor, so I can get away with it).

The term itself does not appear in scripture. I hate it. An image comes to my mind of an initiation ritual performed in school that involved spanking. Boys form two lines making a tunnel through which the victim is forced to run while the perps slap his butt as hard as they can as he passes by.

My text was Matthew 18, and I used I Corinthians 5 as the practical example of how it all works.

The whole of I Co. 5 is an unpleasant pill for evangelicals, so we don't talk about it much. Delivering each other over to Satan for the destruction of the flesh is not a topic on which I've heard Joel Osteen speak recently, although to be honest, I've never listened to him speak. It's just that we're not that into rebuke.

But the last part of Chapter 5 is one that we avoid like hard liquor:

I have written to you in my letter not to associate with sexually immoral people- not at all meaning the people of this world who are immoral, or the greedy and swindlers, or idolaters. In that case you would have to leave this world...What business is it of mine to judge those outside the church? Are you not to judge those inside? God will judge those outside.
I Corinthians 5:9-10, 12-13a
The church in America loves to invert the discipline direction. Instead of focusing discipline on the church, creating a place of honesty, spiritual integrity, and grace; instead of providing a relationally healthy example for the world outside, we love to fantasize about spanking, about the pagans-out-there getting their due. We define our morality by comparison so we come off looking pretty good. We chastise the culture for not living up to our expectations of being Christ-like. It's easier that way.
We say, "Shame on you, Hollywood, for your perversity! We're going to make our own quality movies, like 'Left Behind!'"
We say, "Naughty rappers! We will create our own good music, like "Gaithers' Homecoming" and never listen to your vile African beat!"
We say, "BAD! BAD! Public school system! We will boycott your demonic influence over our children and send them to a Christian School!"
Paul said, "In that case you would have to leave this world."
Too late.
Instead of taking care of ourselves, we enjoy being the tough-loving parents of the universe. We are like the vice-principal in Junior High who makes threats on the morning welcome broadcast in Homeroom: "You better shape up, people, or you'll be in trouble!" Our self-appointed disciplinarian, a.k.a. Pat Robertson, lets the world know that God is angry with New Orleans, and Katrina is the paddle.
(Is it just me, or did anyone else have an overwhelming desire to rush down to Mardi Gras and party?)
Paul made it a point to let the Corinthians know this important truth: The people to remove from relationship in our lives are not people who are outside the church, but inside! Don't apply the principle of shunning to friends and neighbors, family and foes, greedy sexually immoral swindling idolaters though they be! If you're going to avoid someone, avoid the faith-brother or sister who is in rebellion against Jesus. They are the ones who need to experience the natural and logical consequences of their behavior.
What Paul implies is that we must be making relationships with those outside, not ending them. We should pal around with sexually immoral folk. We should seek out time with the greedy. We should surround ourselves with swindlers. We should befriend our neighborhood idolater. Slip on your cardigan and sing like Mr. Rogers: "Hey, pagan idol worshipper! Won't you be my neighbor?"
That's what Jesus did.
We are too often shocked by what comes naturally to those outside of faith. It is silly for the church to attempt to discipline the world for being sinful, which situation cannot be helped apart from Jesus. The church needs to mind her own business and discipline herself.
So form two lines, last person runs through the middle, spank hard.
Posted by Ron Benson at 10:54 AM Links to this post

WARNING! IF YOU ARE AN EVANGELICAL CHRISTIAN WHO FINDS IT DIFFICULT TO LAUGH AT YOURSELF, DON'T BOTHER WITH THIS!

I got this link from Lark News today. Looks like March 14 is going to be a good day - when we can all rush to our bookstore and buy "A Field Guide to Evangelicals." Here's the link. Be sure and read the excerpt. http://larknews.com/guide/

Here's the Lark News regular site for a bite of satire: http://www.larknews.com/

Enjoy, and let me know what you think.
Posted by Ron Benson at 9:34 AM 2 comments: Links to this post