We saw a guy locking a bike to a chain link fence. It was our only clue to the exact location of the Back Alley Bike Shop, besides the name and the general Cass Corridor location. Drove down the same alley, saw a kid scoot around the corner on a bike and head up a dark narrow stairwell. Heard the sound of many people upstairs. Could have been something different, considering the location. Intuition was rewarded by a rugged, upper floor chop-shop suite. It was filled with perspiring pedalers pushing the gears on bicycles sitting upside down on benches or held in the air by support stands. More than that, filled with bikes. More than you can imagine.

Little Blond Girl, around 12 years old, gave us the $1.00 tour. She threw her arms out, generally pointing to the big room around her, to the loose group of bikes and parts.

"Here's the bikes being worked on."

She pointed to another part of the same large room. "Here's the Office."

The "Office" was a counter salvaged from the curb modified to represent the Reception Desk, and behind it against the wall a scattered shelf of paper, some books, and a few worn staplers.

"Here's the Spare Parts." She wore her white oversize T-shirt like a dress with a pair of jeans underneath. The shirt dragged behind her, made her look smaller than she was, and she was small. She pointed a sleeve toward the wall where shelves held coffee cans and plastic containers overflowing with brake pads, pedals, seats, racks, gears, coils of cables, more than you can imagine. All chopped from old bikes.

Little Blond Girl said, "Ya wanta see the Bone Pile?" She bounced around the corner into another part of the operation.

Spread out in the large room, organized by style in long, crowded rows, piled on each other: bikes.

"There's kids, ten-speeds, mountain, three-wheelers." She jogged around the aisles, holding up examples. Bikes. More than you can imagine.

"Back here they keep the Summer Program bikes." She threw a few rims up onto a small hill of rims, and made a path into what once was - a shower? - and in the dark pointed to some bikes. "If they don't get em done in a month they get put out in the big room."

"Ya wanna see the paint room?" Little Blond Girl didn't expect an answer. She skirted through another door and found a small workbench with some spray paint cans in the middle of more parts.

"They paint parts like this," she said, and she picked up a set of keys on a ring on the bench, took a can of paint and sprayed the keys. She held them up, getting a little paint on her white shirt.

"See? Like this:" her innocent assumption that we had never seen anything spray painted before.

She picked up a can of spray paint and used it as a pointer.

"See? There's some there . . . " She sprayed in the direction she wanted us to look. A mobile hanging made of bike miscellany.

"See? More there . . ." She sprayed in another direction. A Schwinn sculpture.

"Some more over here . . ." Sprayed again. An unidentified Huffy-creation-in-progress.

She liked spraying the paint into the air.

We turned to go so we wouldn't get sprayed, and so that she wouldn't empty the can pointing things out to us.

She jumped in front of us. "Wanna see the Work Room?"

She took us back into the first large room. Same area as the Office and the Spare Parts. Lots of people, maybe twenty, working on bikes.

"Here's the Work Room. This is where we all work on bikes, fixen em up, taken em apart."

A guy with long hair working on a mountain bike looked over and smiled. Another young man was tooling a cool racer on a workstand alongside a kid who was talking his ear off. A twenty-something woman finessed a gear shifter with the help of a fifty-something guru. One large oscillating fan close to an open window pushed a little air around while steamy bike lovers took care of business.

Little Blond Girl left us and flitted around the work room, talking to everybody.

We wanted to pick up some parts, build a bike, and ride out to offer it to somebody.
Posted by Ron Benson at 8:23 AM 1 comment:

A recent vacation with inlaws, combined with a focus on my own mom, (left at our home with my generous brother), made me painfully aware of the time bomb that ticks inside me; inside all of us, whether we like it or not.

It is inevitable. It is built in. It is frightening beyond words. If you would rather live in blissful ignorance until it is too late, don't read any further. If you are brave enough to face the truth, read on, Oh Courageous One.

Here is the woeful, painful, ironic reality that will drive you nuts:

We are becoming our parents.

Three generations of Bensons sat in the living room comparing little toes. We noticed that the pinky toes of our left feet were immovable. Our right foot pinky toes flexed and pulled, the muscles responding to our mindful control. Our minds were not strong enough to convince similar motion from the left foot pinky extremity.

As if that's not scary enough, what is true of pinky toes is also true of emotions, behavior, and aging. When I look at myself through the lens of my father, I recognize that I bear a stronger resemblance to him in the way I fix my breakfast than in the way my male pattern baldness is developing, which is a pretty jagged pill to take if you've seen the back of my head. My dad ate oatmeal every stinking day, the same brand, the same thick-paste consistency, doused in half-and-half, eaten with the same chewing sounds. Not one of these eccentricities could be altered without a major depression setting in.

I insist on a half grapefruit, lightly dusted with sugar, with hot coffee from fresh ground beans. This is followed by a bagel, not the bready, yeasty, cheap kind from the grocery store, but a boiled and baked bagel from Elaine's. I won't eat it unless it is cut in half and toasted hard. I add cream cheese, which I spread carefully around the bagel for about ten minutes. If this is not what I eat for breakfast, I can be a little grumpy. OK - I can be downright suicidal.

But at least I am not like my dad! Nope! No oatmeal for me!

This is what is so aggravating: I have fought my whole life long, all of fifty years, NOT to be my father. Sure, Dad had some admirable qualities which I pray to emulate. He was faithful. He was a great preacher and pastor. He could be fun, and he was sacrificial. He understood grace.

But, just like you, there is a part of me that says: I will not be like my father. I will be my own person! I will be an individual! I will not fall to the same error and weakness and emotional pile of contradictory angst that was clear and present in my father when I was a teenager. I will not be set in my ways, will not be stubborn and moody, will not get stuck in the deep ruts on the edge of life. I will live free. (Can you hear violins?) I will be wild and adventurous. (Tympani can be heard softly as strings rise in dynamic tone.) I will step off the road and into the unknown every chance I get! (Horns make their entrance.) I will not be fettered by the genetic code of my forebears! (Reaching crescendo!) I will be ME!

But before that, could you pass the cream cheese? 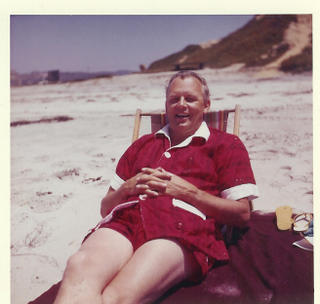