Somewhere, out in the hollers of Tennessee, roughly between Nashville, Columbia, and Memphis, is a town called Nunnelly.

Nunnelly is where my first-born, April, is headed. We have all lived together within same-state borders for the entire existence of the Benson family - until now. Now, Nunnelly gets my daughter.

Sure, we're not losing a daughter, we're gaining a travel destination. Nunnelly.

I think I saw Nunnelly pass by as I was driving the car along a small two-lane out in the hollers of Tennessee. As I sped by, blasting through Tennessee at 32mph, Nunnelly was a blur on my right (or was it my left?) Should a blur, viewed out of the corner of one of my eyes, host the presence of my beloved daughter? What has Nunnelly ever done to deserve this? Does Nunnely fully appreciate who's headed its way?

I drove to Tennessee to help her move in. When we left Royal Oak, MI, we didn't have a clue where she would be living. She had done some homework; within a few hours after arriving on Saturday she had signed papers for a funky two-room apartment. Nunnelly didn't have any accomodations, so she settled for the next biggest town near Nunnelly: Centerville. She works in Nunnelly, she lives in Centerville.

She's employed by a boys' camp, working with teenagers from desperate parents who pay a lot of money and send their kids away because they're disruptive. My wife, Linda, and I are desperate parents who would pay a lot of money to have our kids close to home because they are great people. I've wondered how all of us - Linda, me, April's three brothers, Grandma, and Buster the dog - could disguise ourselves as disruptive teens who could go and live at the camp. Three brothers won't have a problem. But Grandma? It's a stretch.

Twenty hours after we had arrived in Tennessee, I pointed my van toward the North and drove the 10 hours back to Michigan alone. I only cried until Kentucky.

Nunnelly, you'd better be good to her. 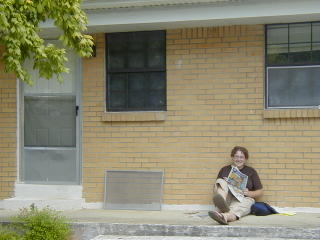