Come, Thou fount of every blessing;
Tune my heart to sing Thy praise.
Streams of mercy never ceasing
Call for song of loudest praise.
Teach me some melodious sonnet,
Sung by flaming tongues above.
Praise the mount! I’m fixed upon it,
Mount of Thy redeeming love.

Here I raise my Ebenezer;
Hither by Thy help I’ve come;
And I hope, by Thy good pleasure,
Safely to arrive at home.
Jesus sought me when a stranger,
Wandering from the fold of God;
He, to rescue me from danger,
Interposed His precious blood.

O to grace how great a debtor
Daily I’m constrained to be!
Let Thy goodness, like a fetter,
Bind my wandering heart to Thee.
Prone to wander, Lord, I feel it,
Prone to leave the God I love;
Here’s my heart, O take and seal it,
Seal it for Thy courts above.
Posted by Ron Benson at 9:40 AM No comments: 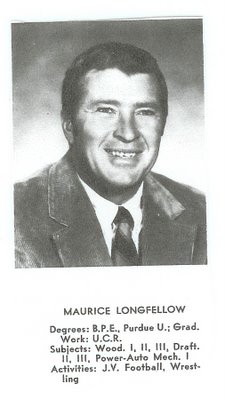 The Second String of the JV football team at San Jacinto High School only played in a crisis.

On this particular autumn evening, in a Southern California drizzle, the crisis loomed. The team was falling apart on the field, figuratively and literally. Guys were getting hurt, being whacked and beaten in ways they’d never practiced – who would hit that hard in practice? And the plays weren’t working, plans were falling apart, players out of position, wandering around. Coach Longfellow was miffed. No. That’s not the right term. But I would be amiss to use the kind of language needed to adequately describe his disdain.

He was huffing and puffing up and down the sidelines. The seated members of the Second String avoided his path and his eyes; you didn’t want to be challenging the leader of the pack by looking him in the eye at that particular moment. So we looked down at our four-years-worn football shoes, inherited from the varsity team two years ago.

Coach Longfellow steamed past me, ranting about the offensive line and their obvious ignorance of the play book. “?$*&%” he said, “These guys don’t know how to block! They don’t know the plays! Those *$!$#^ing airheads.”

Maybe because I’d never heard those words actually spoken by a living person out loud, I looked up at him just then, and my eyes met his eyes. Wrong move.

“BENSON!” I looked back down at my shoes, quick. “BENSON! RONNIE BENSON!!!”

“Yes, Coach?” I said, choking, my adolescent voice cracking, head towards him but avoiding eye contact.

“Benson, I need someone to go in there and block. You’re a tackle, do you know the plays?”

Plays? Coach Longfellow obviously hadn’t been paying attention at practice. I didn’t know football from farm implements. I only joined to impress girls – that’s what some of my friends told me would work.

I stood, and he came over and put his face down several inches into mine. “BENSON! DO YOU KNOW THE PLAYS? HAVE YOU STUDIED THE PLAY BOOK?”

Play book? They have them in a book? Did anyone ever give me that book? What exactly did the book look like, sir? I’m sorry, Coach Longfellow, but apparently there’s been some problem with the circulation on this play book thing – I’ve never even seen a play book and don’t have a clue what it would be or how to use it. And I think my dog ate it, anyway.

My head was swimming, and there was this part of me that really did want to step up and be a man and come through and go out and hit someone hard and catch the ball and run it in for a touchdown and have the cheerleaders swarm around me with their pom poms bouncing. That part of me attempted to take control from the other part of me, the weenie part of me, and in the subsequent internal fracas out of my mouth came my BIG STATEMENT OF SELF-CONFIDENCE:

My keyboard does not have the proper symbols for what came out of Coach Longfellow’s mouth at that moment. Sure, I could put “&*$@#,” but it just doesn’t reflect the honest truth.

I still feel it sometimes – the emotion I felt on the sidelines that Thursday night when he walked away from me. “Self-loathing” does not even come close to describing it.

An assistant put me into the game late in the fourth quarter, when we were down like 65-0. I played three plays and somebody stepped hard on my left foot and broke my little toe. My injury impressed the girls and allowed me to save face. What face I had left, anyway.
Posted by Ron Benson at 11:16 AM 1 comment:

My article for Plain Truth Magazine is now available online. It's called, Caution: Religion Can Hurt Your Marriage, and you can reach it by clicking here:

After you read it, please tell me what you think. I have already heard from several Plain Truth readers who told me their own stories of relational damage at the hands of a legalistic church. If you've got a story, I'd be interested in knowing about it.

Marriages - in fact, relationships of all kinds - need an environment of grace to flourish. The Body of Christ is supposed to be that environment.
Posted by Ron Benson at 12:08 PM No comments:

This is grace: My kids. This is from the U.P. camping trip in July. We're visiting T-Falls. From L to R: Jeremy, April, Jonathan, Garrison. A very good team. 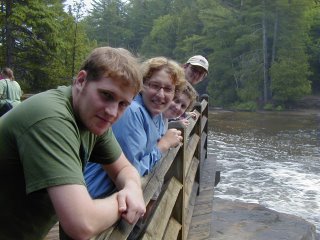