How silently; how silently the wondrous gift is given.
So God imparts to human hearts the blessings of His heaven.

No ear may hear His coming,
But in this world of sin,
Where meek souls will receive Him -

The Dear Christ enters in.

Here's a link for some Christmas fun: http://www.powerpres.com/xmascard03.html
Posted by Ron Benson at 11:31 AM No comments: 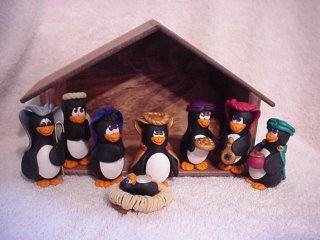 I've been thrashing around in my head, attempting to answer a bit of guilt: Why am I such a curmudgeon when it comes to Christmas?

This nativity scene says it all.

I laugh and poke fun at holiday stupidity and excess. I do it because I follow Jesus. If Jesus turned tables in anger over Passover marketing, what do you think he'd do about Christmas - a holiday bearing his honorable title?

I do not assign blame for the demise of Christmas onto the "secular culture." Why are we always so surprised when people who lack faith don't get it? Of course Madison Ave. will have a different view of a holy day than a person who actually believes Jesus came. It is only natural for a naturalist to fumble the ball when the Hail Mary pass is made by a fundamentalist. Put Jesus in the hands of a religion-neutral social economy and what do you expect? Reverence?

I blame Xmas on Xians.

It's because we are so prone to objectification. When Moses went up the mountain, the void had to be filled; a golden calf did interim duty. When Moses returned, a couple of tablets of stone came with him. The tablets were interesting, but it wasn't the tablets that were important, it was what was written on them: God's words.

But evangelicals, in desperate need of an Object, insist that monuments with the ten commandments be placed in government buildings. What makes us think this will work? It's never, ever, worked before. This is a silly, unnecessary, childish tantrum over something that is trivial, at best, and deceptive, at worst.

Deceptive because we make the assumption that having engraved words on a stone will do ANYTHING. Madonna - singer, not Virgin - wears a cross near her pointy brassiere. Does this phase her? Does this change her? Does this make her holy? If the cross doesn't work for Madonna, the Ten Commandments aren't going to work for the United States government. And in some locations, such placement may produce justifiably similar disgust.

The same is true of Nativity Scenes, angels, stars.

I don't have answers. I know how to poke a finger at the problem, but I don't have a clue how to fix it. It is exhausting for me to envision how we could ever turn this Polar Express around.

So I'll sit here by the fire, listening to "White Christmas," slurping some Egg Nog, smelling the pine air, and praying that the little porcelain babe over there in the made-in-China creche might just come alive, toddle over over to me, and whisper The Answer in my ear.
Posted by Ron Benson at 9:20 AM 5 comments: