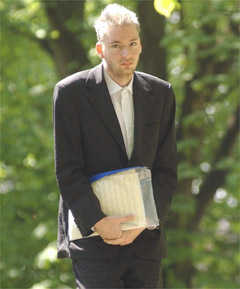 The mystery piano man from London. I've called him "Nigel."
Posted by Ron Benson at 8:54 AM No comments:

Sits at the piano bench in a ragged tuxedo and begins to play selections from the Bach Concertos on the instrument he drew from memory.

Beth, his nurse in the mornings, stands ten feet away. Any closer and he would again be agitated; he is frightened of people, and places, and things. Beth moves a hand to smooth down some of the wrinkles of the blue patterned scrubs she wears. They were stained by the jelly which was on the toast which Nigel tossed her direction at breakfast, but in the light of the fingered artistry of his playing she is subconsciously concerned about the appearance of her clothes. Her mouth is slightly open; her eyes locked on Nigel.

He plays, and clearly has played before. It is not perfection, but it is too close for this hour, for this place, for this Nigel. The skill makes the circumstance tense, but offering hope.

Dr. Standish sits in a folding chair in the dim corner of the dining room. How is it that there is fresh air here? The usual smells of this house have lifted from this corner. How is it that the sounds - cries and groans and babbling of patients - are overwhelmed by the mathematical quiet of Bach? How is it that, at eight-forty on a Tuesday morning, just before his normal rounds begin, confident and stable Dr. Standish is sheltering his face from the small group of people gathered here? He is touched; he is embarrassed.

Nigel plays. His eyes dance to the fugue. The music pours from inside. The labels have been ripped from his clothes, mirroring the nervous truth of his identity. He is completely lost, forgotten by whoever once cared. He is mute by his heart and head, but his fingers speak. They credential a story.

More are gathered here now. They are listening, attentive. This establishes him, anchors him in time. He plays with intent. He has had a yesterday. He will have a tomorrow. None of it is sure, but all is made actual by the music.
Posted by Ron Benson at 2:28 PM 1 comment:

Why I Can't Write, and Why I Do

From Walking on Water, by Madeleine L'Engle:

It may be that we have lost our ability to hold a blazing coal, to move unfettered through time, to walk on water, because we have been taught that such things have to be earned; we should deserve them; we must be qualified. We are suspicious of grace. We are afraid of the lavishness of the gift.

But a child rejoices in presents!

Everything has a story.

I took a walk the other day. It was "Refuse Collection" day - trash day - and up and down the blocks surrounding my house people had put their objects d'junque on the curb, never to be seen again.

What can you tell about someone when you look at their trash?

One house had assembled a used toy store, mostly pre-school stuff, colorful under a layer of toddler grime. Playschool houses, some games, a box or two of stuffed creatures. What prompted the trash? What happened that motivated this stuff - still useful - to become garbage? Did a little child grow up? Was this punishment for some infraction of family rules? Are people moving - a doctor gets relocated; a laid-off auto worker must find work elsewhere? Was there a divorce? Did a child die?

Another block revealed an organ. Small, cheap, maybe 20 years old, at one point a marvelous gift that made the recipient cry, but now superseded by keyboards that can sound like a choir or a truck or an organ. Who played the instrument? Did they stop, or did they upgrade?

There was a house which bore the remnants of a party. Hundreds of bottles. A dozen pizza boxes. What was the celebration? Who was there? Did they leave and drive home sober?

There was a house with four mirrors. All were in good shape, except one which had been broken at the curb. What happened to the occupant that forced a need to abandon these personality tools? Was there the purchase of better mirrors? Or was it a decision to stop looking? Stop caring? Stop obsessing?

One place had a nice couch. We have a couch with holes in it sitting in our living room. This couch was better. I almost thought about . . . But, no. Wrong color. 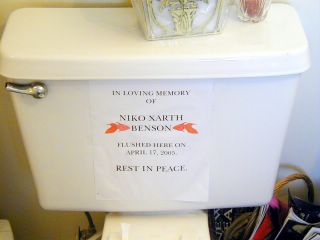 My youngest produced this memorial for his beloved pet Beta fish. His name was Niko Xarth. Not my youngest, who's name is Jon, but the fish. The fish was named Niko Xarth. That's pronounced "szaeorth."

Jon loved his fish and kept good care of him.

Please respond here with condolences. In lieu of flowers, please send contributions to your local SPCA, or the recently formed ROSBLCTF. That's pronounced "rosblechtf." It stands for the Royal Oak Society for Better Living Conditions for Tropical Fish.
Posted by Ron Benson at 10:45 AM No comments: